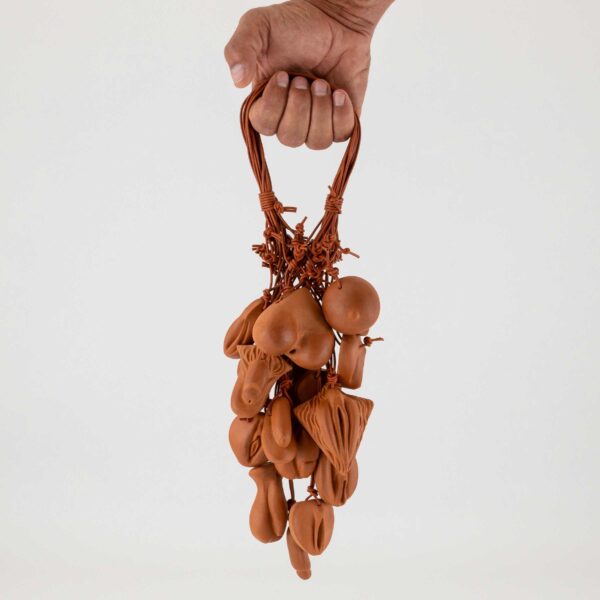 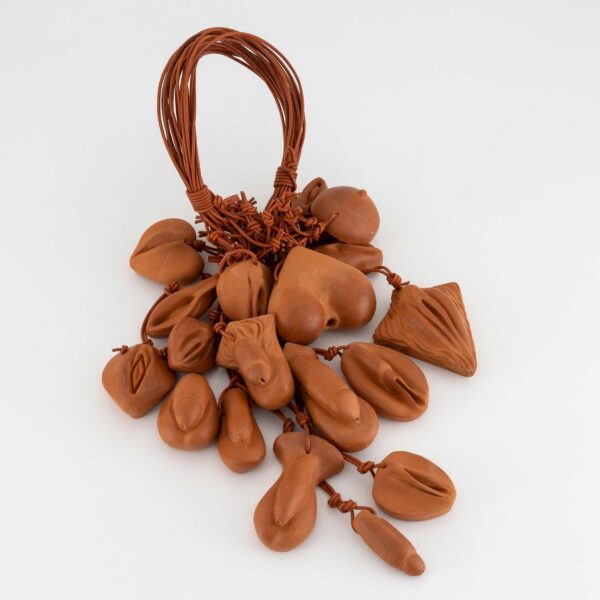 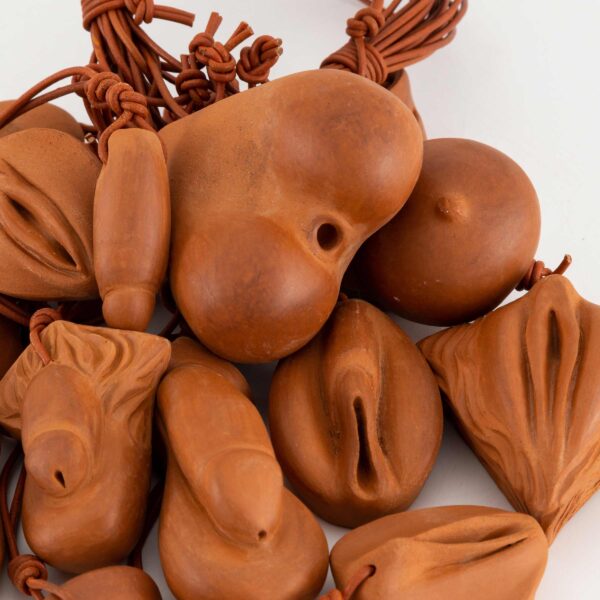 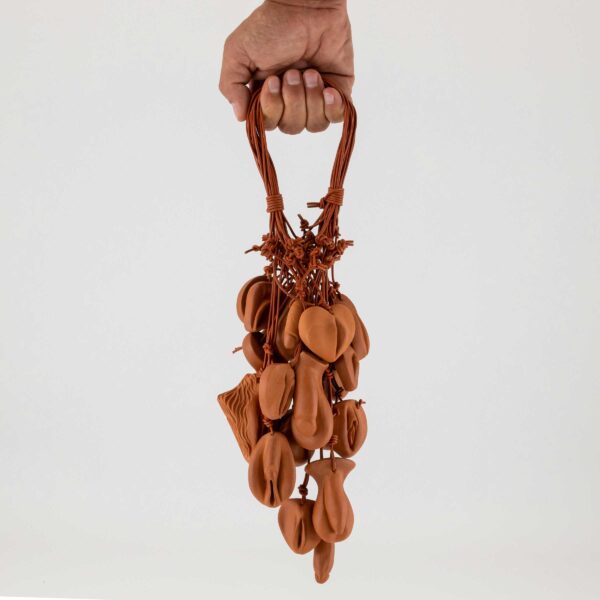 ONE OF A KIND
The “TRANS-ANKH” by René Habermacher represents an interpretation of the Ancient Egyptian symbol of rebirth, the ‘ankh’, transposing the cohesion of race and gender with apotropaic votive genitals of all sexes strung together into a modern era ‘crepundia’. The term derives from the Latin word ‘crepare’ “to rattle or make a noise” and is used for a group of amulets strung together to a charm bracelet to avert the evil eye. The TRANS-ANKH thus both attracts attention and at the same time averts malignant forces. Created by African culture, the ‘ankh’ signifies the linkage of life and immortality in Ancient Egypt. while the ankh is a widely known hieroglyph, it was used as a protective votive or ‘nazar’ worn by Egyptians or commonly held in the hands of ancient Egyptian deities and Pharaohs.

Several theories speculate about its association: Some see the ankh and the the sacral knot of Isis to represent the same thing: promising eternal life through personal resurrection. Ankhs were traditionally placed in sarcophagi to ensure life after death. Another hypothesis claims that the ankh represented male and female reproductive organs interlinked into a single sign.

The powerful symbol of the ankh transgressed across cultures and was borrowed by early Christians who used it in the form of a fish as a symbol for life after death. It subsequently lost its hoop at the top and became the Christian cross and the symbol itself underwent a rebirth: The ankh came into widespread use in Western culture in the 1960s often used as a symbol of African cultural identity.

— One of a kind item

Europe-wide Delivery for every art piece on a secure container.

The end product may differ from the photo due to natural variations of the materials used.

We warranty the uniqueness of the product created by the presented artist.
Material

This website uses cookies to improve your experience while you navigate through the website. Out of these, the cookies that are categorized as necessary are stored on your browser as they are essential for the working of basic functionalities of the website. We also use third-party cookies that help us analyze and understand how you use this website. These cookies will be stored in your browser only with your consent. You also have the option to opt-out of these cookies. But opting out of some of these cookies may affect your browsing experience.
Necessary Always Enabled
Necessary cookies are absolutely essential for the website to function properly. These cookies ensure basic functionalities and security features of the website, anonymously.
Functional
Functional cookies help to perform certain functionalities like sharing the content of the website on social media platforms, collect feedbacks, and other third-party features.
Performance
Performance cookies are used to understand and analyze the key performance indexes of the website which helps in delivering a better user experience for the visitors.
Analytics
Analytical cookies are used to understand how visitors interact with the website. These cookies help provide information on metrics the number of visitors, bounce rate, traffic source, etc.
Advertisement
Advertisement cookies are used to provide visitors with relevant ads and marketing campaigns. These cookies track visitors across websites and collect information to provide customized ads.
Others
Other uncategorized cookies are those that are being analyzed and have not been classified into a category as yet.
SAVE & ACCEPT

Your cart is empty.

Have a look here!
CLOSE